SAN RAFAEL, Calif., June 17, 2020 /PRNewswire/ -- BioMarin Pharmaceutical Inc. (NASDAQ: BMRN) announced today additional data from its previously reported four-year update of an open-label Phase 1/2 study of valoctocogene roxaparvovec, an investigational gene therapy treatment for severe hemophilia A. The results were presented during a late-breaking oral presentation at the World Federation of Hemophilia (WFH) Virtual Summit by Professor John Pasi, M.B., Ch.B., Ph.D., from Barts and the London School of Medicine and Dentistry and Chief Investigator for this Phase 1/2 study.

"With four years of data, this study represents the longest duration of clinical experience for any gene therapy in hemophilia A.  It is exciting to observe that all study participants remain off Factor VIII prophylaxis therapy, while also experiencing a greater than 90 percent reduction in bleeding episodes from a single administration of valoctocogene roxaparvovec," said Professor Pasi.  "These data demonstrate the very real potential of a paradigm shift in the treatment of hemophilia A and that ongoing research into gene therapies could represent an entirely new way to approach meeting the high unmet need in patients with severe hemophilia A."

"BioMarin is committed to the bleeding disorders community with the most robust and advanced clinical development program for a potential first gene therapy in severe hemophilia A," said Hank Fuchs, M.D., President, Global Research and Development at BioMarin.  "We are pleased to share these data at WFH.  Demonstrating a 96% reduction in exogenous Factor VIII usage as patients are now producing their own endogenous factor VIII is a potential benefit that we hope to be able to offer as we work closely with regulators to seek approval and work to reduce the burden of hemophilia."

In the six study participants who were previously on Factor VIII prophylaxis in the 6e13 vg/kg cohort, the data showed substantial and sustained reductions in bleeding that required Factor VIII infusions. In the year prior to treatment with valoctocogene roxaparvovec, the mean Annualized Bleed Rate (ABR) was 16.3 and the median was 16.5. During the four years following treatment with valoctocogene roxaparvovec, the cumulative mean ABR was 0.8, which represents a 95% reduction from baseline. In the fourth year, the mean ABR was 1.3 and the median was zero (see Table 1). There was a 96% reduction in mean Factor VIII usage to 5.4 infusions per year cumulatively over four years from the baseline of 135.6 infusions per year.

Among all seven study participants in the 6e13 vg/kg cohort, 86% or six out of seven were bleed-free in the fourth year. All participants remain off Factor VIII prophylaxis therapy (see Table 1).

In the year prior to treatment with valoctocogene roxaparvovec, the mean ABR was 12.2 and the median was 8.0. The cumulative mean ABR was reduced by 93% to 0.9 with continued absence of target joint bleeds in 5 of 6 subjects during the three years observed, which represents a 93% reduction from baseline. During the third year of follow-up, the mean ABR was 0.5 and the median was zero (0), and 67% or four out of six study participants were bleed-free. Five out of six participants had no spontaneous bleeds. There was a 96% reduction in mean Factor VIII usage to 5.7 infusions per year cumulatively over three years from the baseline of 142.8 infusions per year. (see Table 1)

Table 1: ABR prior to and following treatment with valoctocogene roxaparvovec in BioMarin’s Phase 1/2 study, as presented today at the WFH Virtual Summit. 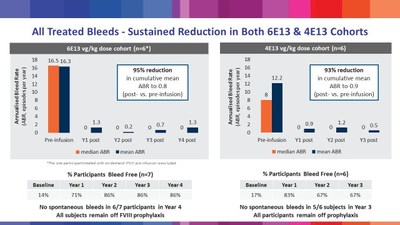 For the 6e13 vg/kg and 4e13 vg/kg cohorts, mean Factor VIII activity levels over four and three years, respectively, support the observed reductions in bleed rates and annualized Factor VIII usage. All study participants had severe hemophilia A at baseline, defined as less than or equal to 1 IU/dL of Factor VIII activity. 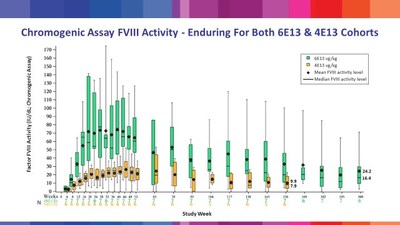 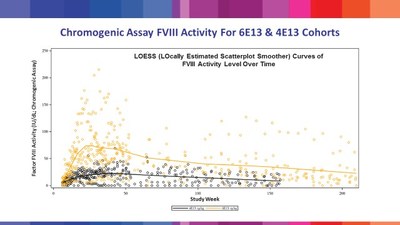 Webinar with BioMarin and Study Investigators, Today at 5:00 PM ET

At 5pm ET, BioMarin management will host a webinar with key clinical investigators, Professor John Pasi and Dr. Steve Pipe, to discuss results from the Phase 1/2 Study of valoctocogene roxaparvovec gene therapy for severe hemophilia A presented at the WFH Virtual Summit today.  Interested parties may access a live video webinar that will include audio and slides at:  https://bmrn.zoom.us/j/94005113278

For access to the audio portion only, please use a dial-in number in your region for the highest quality connection:

Overall, the safety profile of valoctocogene roxaparvovec remains consistent with previously reported data with no delayed-onset, treatment-related events.  No participants developed inhibitors to Factor VIII, and no participants withdrew from the study.  No participants have developed thrombotic events.  The most common adverse events associated with valoctocogene roxaparvovec occurred early and included transient infusion-associated reactions and transient, asymptomatic, and mild to moderate rise in the levels of certain proteins and enzymes measured in liver function tests with no long-lasting clinical sequelae.

The global Phase 3 study of valoctocogene roxaparvovec at the 6e13 vg/kg dose (GENEr8-1) evaluates superiority of valoctocogene roxaparvovec to the current standard of care, FVIII prophylactic therapy.  The sample size of the GENEr8-1 study is approximately 130 total participants.  Enrollment is completed and the data from this study is expected in the fourth quarter of 2020 or the first quarter of 2021.

BioMarin has five clinical studies underway in its comprehensive gene therapy program for the treatment of severe hemophilia A.  In addition to the global Phase 3 study GENEr8-1, the Company is running a Phase 1/2 Study with the 6E13kg/vg dose of valoctocogene roxaparvovec in approximately 10 participants with pre-existing AAV5 antibodies.  The Company is also running two additional and separate studies, one to study AAV seroprevalence in people with severe hemophilia A and one non-interventional study to determine baseline characteristics in people with hemophilia A.  Participants in the Phase 1/2 dose escalation study will continue to be monitored as part of the global program underway.

The European Medicines Agency (EMA) validated the Company's Marketing Authorization Application (MAA) for valoctocogene roxaparvovec, which has been in review under accelerated assessment since January.  Recognizing valoctocogene roxaparvovec for its potential to benefit patients with unmet medical needs, EMA granted access to its Priority Medicines (PRIME) regulatory initiative.  Although the MAA remains under accelerated assessment at this time, the Company expects the review procedure to be extended by at least three months due to COVID-19 delays.  Further, the Company believes there is a high possibility that the MAA will revert to the standard review procedure, as is the case with most filings that initially receive accelerated assessment.  Because of the combination of these events, the Company expects an opinion from the Committee for Medicinal Products for Human Use (CHMP) in late 2020/early 2021.

BioMarin's valoctocogene roxaparvovec has also received orphan drug designation from the FDA and EMA for the treatment of severe hemophilia A. The Orphan Drug Designation program is intended to advance the evaluation and development of products that demonstrate promise for the diagnosis and/or treatment of rare diseases or conditions.

The Company believes that both submissions represent the first time a gene therapy product for any type of hemophilia indication is under review for marketing authorization by health authorities.

People living with hemophilia A lack sufficient functioning Factor VIII protein to help their blood clot and are at risk for painful and/or potentially life-threatening bleeds from even modest injuries.  Additionally, people with the most severe form of hemophilia A (FVIII levels <1%) often experience painful, spontaneous bleeds into their muscles or joints.  Individuals with the most severe form of hemophilia A make up approximately 50 percent of the hemophilia A population.  People with hemophilia A with moderate (FVIII 1-5%) or mild (FVIII 5-40%) disease show a much-reduced propensity to bleed.  The standard of care for individuals with severe hemophilia A is a prophylactic regimen of replacement Factor VIII infusions administered intravenously up to two to three times per week or 100 to 150 infusions per year.  Despite these regimens, many people continue to experience breakthrough bleeds, resulting in progressive and debilitating joint damage, which can have a major impact on their quality of life.

Hemophilia A, also called Factor VIII deficiency or classic hemophilia, is an X-linked genetic disorder caused by missing or defective Factor VIII, a clotting protein. Although it is passed down from parents to children, about 1/3 of cases are caused by a spontaneous mutation, a new mutation that was not inherited. Approximately 1 in 10,000 people have Hemophilia A.

BioMarin is a global biotechnology company that develops and commercializes innovative therapies for serious and life-threatening rare and ultra-rare genetic diseases. The Company's portfolio consists of six commercialized products and multiple clinical and pre-clinical product candidates. For additional information, please visit www.biomarin.com. Information on BioMarin's website is not incorporated by reference into this press release.

This press release contains forward-looking statements about the business prospects of BioMarin Pharmaceutical Inc., including without limitation, statements about: (i) the development of BioMarin's valoctocogene roxaparvovec program generally, (ii) the impact of valoctocogene roxaparvovec gene therapy for treating patients with severe hemophilia A, (iii) the 4-year data demonstrating the very real potential of a paradigm shift in the treatment of hemophilia A and that ongoing research into gene therapies could represent an entirely new way to approach meeting the high unmet need in patients with severe hemophilia A, (iv) the data from the Company's Phase 3 study expected in the fourth quarter of 2020 or the first quarter of 2021, (v) that Factor VIII activity levels over four years supporting reductions in bleed rates and Factor VIII usage, and (vi) the potential approval and commercialization of valoctocogene roxaparvovec for the treatment of severe hemophilia A, including timing of such approval decisions. These forward-looking statements are predictions and involve risks and uncertainties such that actual results may differ materially from these statements. These risks and uncertainties include, among others: results and timing of current and planned preclinical studies and clinical trials of valoctocogene roxaparvovec, including final analysis of the above interim data; any potential adverse events observed in the continuing monitoring of the patients in the Phase 1/2 trial; the content and timing of decisions by the FDA, the European Commission and other regulatory authorities, including the potential impact of the COVID-19 pandemic on the regulatory authorities' abilities to issue such decisions and the timing of such decisions; the content and timing of decisions by local and central ethics committees regarding the clinical trials; BioMarin's ability to successfully manufacture valoctocogene roxaparvovec; and those other risks detailed from time to time under the caption "Risk Factors" and elsewhere in BioMarin's Securities and Exchange Commission (SEC) filings, including BioMarin's Quarterly Report on Form 10-Q for the quarter ended March 31, 2020, and future filings and reports by BioMarin. BioMarin undertakes no duty or obligation to update any forward-looking statements contained in this press release as a result of new information, future events or changes in its expectations.

BioMarin® is a registered trademark of BioMarin Pharmaceutical Inc.